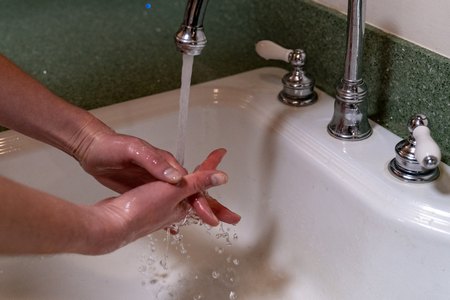 Can you recall when you were younger? Did you have a mother, or grandmother, that would often call you from your playing to come and eat lunch or supper? If you did, then I can imagine that some of you remember being asked, “did you wash your hands before you came to the table”. This practice was encouraged so that your hands would be relatively clean when you ate. Certainly there was nothing wrong with this practice. It promoted good hygiene! However, what if that practice became so important that someone taught that you had to wash your hands to be pleasing to God? Imagine someone starting a tradition, that may even have had a good meaning behind it, and then binding that tradition on others. Imagine even more that some bound that tradition more sternly than they did aspects of God’s law! As hard as that may be to fathom today, that used to be the case for some Jews.

Luke records a time when Jesus was invited to eat with “a certain Pharisee” (Luke 11:37). Jesus accepted the invitation, but did something that made the Pharisee uneasy. Instead of taking the time to wash beforehand, Jesus “…went in, and sat down to meat” (Luke 11:37). Luke records, “And when the Pharisee saw it, he marvelled that he had not first washed before dinner” (Luke 11:38).

This was not the only time that washing was an issue. Mark mentioned, “Then came together unto him the Pharisees, and certain of the scribes, which came from Jerusalem. And when they saw some of his disciples eat bread with defiled, that is to say, with unwashen hands, they found fault. For the Pharisees, and all the Jews, except they wash their hands oft, eat not, holding the tradition of the elders. And when they come from the market, except they wash, they eat not. And many other things there be, which they have received to hold, as the washing of cups, and pots, brazen vessels, and of tables. Then the Pharisees and scribes asked him, Why walk not thy disciples according to the tradition of the elders, but eat bread with unwashen hands?” (Mark 7:1-5).

How did the Lord handle such instances? In Luke’s account, Jesus responded, “…Now do ye Pharisees make clean the outside of the cup and the platter; but your inward part is full of ravening and wickedness. Ye fools, did not he that made that which is without make that which is within also? But rather give alms of such things as ye have; and, behold, all things are clean unto you. But woe unto you, Pharisees! for ye tithe mint and rue and all manner of herbs, and pass over judgment and the love of God: these ought ye to have done, and not to leave the other undone” (Luke 11:39-42). Mark recorded that Jesus said, “…Well hath Esaias prophesied of you hypocrites, as it is written, This people honoureth me with their lips, but their heart is far from me. Howbeit in vain do they worship me, teaching for doctrines the commandments of men. For laying aside the commandment of God, ye hold the tradition of men, as the washing of pots and cups: and many other such like things ye do. And he said unto them, Full well ye reject the commandment of God, that ye may keep your own tradition. For Moses said, Honor thy father and thy mother; and, Whoso curseth father or mother, let him die the death: But ye say, If a man shall say to his father or mother, It is Corban, that is to say, a gift, by whatsoever thou mightest be profited by me; he shall be free. And ye suffer him no more to do ought for his father or his mother; Making the word of God of none effect through your tradition, which ye have delivered: and many such like things do ye” (Mark 7:6-13).

Let us be diligent to uphold and obey the Word of God before any traditions or doctrines of men. Even if the tradition has good intentions, it should never be that it comes before God and His Word.
~ Corey Barnette