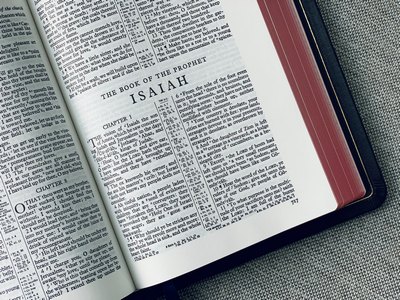 It was prophesied long ago that the people of God would one day be called by a “new name”. “And the Gentiles shall see thy righteousness, and all kings thy glory: and thou shalt be called by a new name, which the mouth of the LORD shall name” (Isa. 62:2). Please notice that the “new name” would not be of human origin, but rather it would come from God. To see the fulfillment of that prophecy one needs to go to the book of Acts in the New Testament. In that book one can follow the birth and growth of the church of Christ. As the church grew, the people of God started to be referred to by a “new name”. “And when he had found him, he brought him unto Antioch. And it came to pass, that a whole year they assembled themselves with the church, and taught much people. And the disciples were called Christians first in Antioch” (Acts 11:26). This “new name” is still being used to refer to God’s people today. There are some critics who try to devalue the term Christian by claiming that its origination was a derogatory way of identifying members of the church. While that might have been the case with some, the fact that the name Christian is still widely used today is indicative of its divine origin.

As one continues to study the New Testament, he will notice at times that Christians are referenced in various other ways as well. One of those times is in the book of First Peter. It is there that the apostle wrote, “But ye are a chosen generation, a royal priesthood, an holy nation, a peculiar people; that ye should show forth the praises of him who hath called you out of darkness into his marvellous light” (1 Pet. 2:9). Each of these four descriptions allows us to have a deeper understanding of what Christians are to God. A diligent Bible student will readily recognize that this seems very similar to the way that God spoke of Israel long ago. Moses wrote, “For thou art an holy people unto the LORD thy God: the LORD thy God hath chosen thee to be a special people unto himself, above all people that are upon the face of the earth” (Deut. 7:6). Today, God’s people are not the physical nation of Israel, but rather the spiritual Israel, which is the church (Gal. 6:16). Let us further examine the way that God has described His people.

First of all, Christians are “a chosen generation”. On the outset, even though Christians are “chosen”, that does not take away our free will. Yes, the church of Christ was predestinated by God (Eph. 1:5). However, each Christian had to make his or her own decision to follow God. That decision came from being “called” of God. This “calling” is nothing supernatural, contrary to the thoughts of some. Instead, we become the chosen of God when we answer the call of the Gospel. “Whereunto he called you by our gospel, to the obtaining of the glory of our Lord Jesus Christ” (2 Thess. 2:14). That is how God “chooses” us today.

Second, Christians are “a royal priesthood”. This helps us to further understand that First Peter 2:9 is not referring to the physical nation of Israel. Under the Old Law, the only ones that were permitted to be priests were of the tribe of Levi (Num. 16:4-10). Today, every Christian, whether of Jewish ancestry or Gentile ancestry, is a priest of God. Peter established that truth by stating that Christians are able “…to offer up spiritual sacrifices, acceptable to God by Jesus Christ” (1 Pet. 2:5). Scriptural worship of Christians is not rejected by God. Also, not only are Christians priests, but they are “royal”. This is a direct reference to the church being the kingdom of God (Matt. 16:18-19; Col. 1:13; Rev. 1:6).

Third, Christians are “an holy nation”. This obviously is similar to the way that physical Israel was a nation of God’s under the Old Law. In understanding this, Paul wrote, “For our conversation is in heaven; from whence also we look for the Saviour, the Lord Jesus Christ” (Phil. 3:20). The word “conversation” is also translated by some as “citizenship”. The spiritual “citizenship” of Christians is not physical, but spiritual. Also, Christians are to be “holy”. To be “holy” is to be pure in the sight of God. Peter also wrote, “But as he which hath called you is holy, so be ye holy in all manner of conversation; Because it is written, Be ye holy; for I am holy” (1 Pet. 1:15-16).

Finally, Christians are “a peculiar people”. At first, some might think that is calling Christians “strange”. In a way, compared to the rest of the world, Christians are profoundly different (Rom. 12:1-2). However, the idea of Peter was that Christians are “a people of God’s own possession”. By allowing His blood to be shed, Jesus bought/purchased the church. “Take heed therefore unto yourselves, and to all the flock, over the which the Holy Ghost hath made you overseers, to feed the church of God, which he hath purchased with his own blood” (Acts 20:28). Literally, Christians belong to God. What a great privilege it is to be so special amongst all of humanity.

If you are a Christian, you are many different things all at once. We should appreciate and thank God that we can be known as “a chosen generation, a royal priesthood, an holy nation, a peculiar people”.
~ Corey Barnette