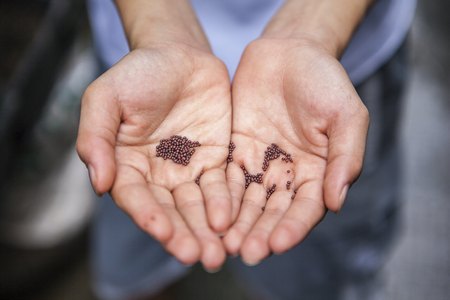 Many sermons and articles have been written that correctly identify the kingdom and the church as the same thing (Matt. 16:18-19; Col. 3:17). That is not the intent of this article however. Instead, we are to examine two things that Jesus used to describe what the kingdom/church is like. First of all we find, “Then said he, Unto what is the kingdom of God like? and whereunto shall I resemble it? It is like a grain of mustard seed, which a man took, and cast into his garden; and it grew, and waxed a great tree; and the fowls of the air lodged in the branches of it” (Luke 13:18-19). Matthew’s account further describes the mustard seed as “…the least of all seeds…” (Matt. 13:32). That indication means that to the world, the kingdom/church is merely a small thing that might seem to be of little significance. However, as Jesus explained, from something so small, the kingdom/church grows to be quite powerful and large.

Truly, when “the seed” is planted and watered, the kingdom continues to grow larger and larger with each obedient soul (Luke 8:11; 1 Cor. 3:6). Just think about the beginning of the kingdom. On the Pentecost following Christ’s ascension, the kingdom began in the city of Jerusalem with Jesus as King and twelve men who were His servants. Through the preaching and teaching of faithful brethren, the kingdom/church began to grow and grow (Acts 2:47).

Today, the kingdom can be found in various locations around the world. Amazingly, the power of the kingdom to grow is still as potent as it ever was! Secondly, Jesus explained that the kingdom “…is like leaven, which a woman took and hid in three measures of meal, till the whole was leavened” (Luke 13:21). Today, more people are probably familiar with the term yeast instead of leaven. Yeast is the leavening agent that is inserted into dough to make it rise. It has been common for generations to allow some dough to ferment. Once that process has fully occurred, the fermented dough can be added to another amount of fresh dough. The fermented dough will then permeate the fresh dough until the entire lump is effected.

Paul explained this truth when he addressed failure of the church at Corinth to discipline an erring brother. Paul wrote, “Your glorying is not good. Know ye not that a little leaven leaveneth the whole lump? Purge out therefore the old leaven, that ye may be a new lump, as ye are unleavened. For even Christ our passover is sacrificed for us: Therefore let us keep the feast, not with old leaven, neither with the leaven of malice and wickedness; but with the unleavened bread of sincerity and truth” (1 Cor. 5:6-8). Again, something small becomes something much larger.

The kingdom started small, but just think of the number of Christians that have lived since it’s inception. As far as the kingdom being like a grain of mustard or leaven, one has to understand that someone actively has to plant the seed or insert the leaven for the desired effect. If we want to see the kingdom grow larger and larger, we who are already in the kingdom need to be teaching and preaching the Gospel of Jesus Christ. Jesus instructed, “Go ye therefore, and teach all nations, baptizing them in the name of the Father, and of the Son, and of the Holy Ghost: Teaching them to observe all things whatsoever I have commanded you: and, lo, I am with you always, even unto the end of the world. Amen” (Matt. 28:19-20).

While it is possible for a man to study and learn the truth on his own, the fact is that many do not read the Bible. The kingdom should be able to tell the world what it has learned and obeyed. By so doing, the kingdom will continue to grow even while there is opposition to such (Dan. 2:44)
~ Corey Barnette